This view from Zion’s bell-tower was captured in a rare lithograph illustration produced in 1877 by William Denslow, (soon afterwards the famous illustrator of the book The Wonderful Wizard of Oz), depicting the layout of the streets of Chambersburg, and their juncture at the town Square.

Only two known copies of this rare lithograph reportedly exist today, one proudly owned by a Zion member.

The city was Chambersburg, Pennsylvania — at the time a small town located at an intersection of thriving agriculture, commerce and local-made goods, a junction for travel to the busy cities of the north or south. A stop-over point perhaps, as travelers sought rest while on their way further west over the mountains of the rugged and ever-expanding “western Frontier” of a new nation.

Originally founded in 1764 as a fort, the town was settled by Colonel Benjamin Chambers, just 15 miles north of the line later officially surveyed by Charles Mason and Jeremiah Dixon. Quickly after its founding, the town grew with an influx of German immigrants. They migrated from the Palatinate area of Germany to the Cumberland Valley, an area that so closely resembled their homeland. Their German Reformed faith came with them.

Without a building, they gathered first in the Inn (and tavern) of Nicholas Snider  – in the northwest corner of the town Square – and with help from a Rev. Faber of Hagerstown, Maryland, formed a congregation in 1778.

To encourage the local settlers, Col. Chambers deeded land for a church and graveyard in 1780, at the intersection of South Main Street and what was then German (now Liberty) Street. The first building was a log schoolhouse. In 1811, the construction of the present structure was begun – with most work completed by 1813.

Listed on the National Register of Historic Places, Zion Reformed Church today continues to serve as a house of praise to God.

Zion is historically unique, in that it is one of three local 'Rose Rent Churches.'  In its deed is the stipulation that each June, the congregation pay the annual rent of one rose from the church grounds to a descendant of the Chambers family, “in perpetuity.”

Zion’s bell tower has long stood watch over the town. After a steep climb up the staircase rising through the hand-hewn timbers, residents watched during the Civil War for the first sight of Rebel Invasion.

It has always offered a unique and breath-taking panoramic view of downtown Chambersburg. 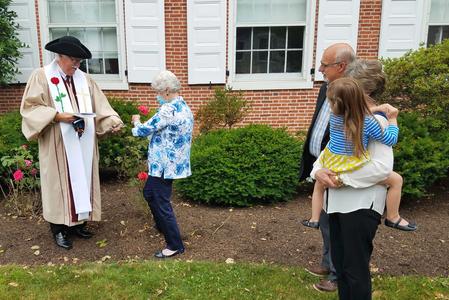 The Burial Grounds at Zion Reformed Church: A Walk Back Through Local History 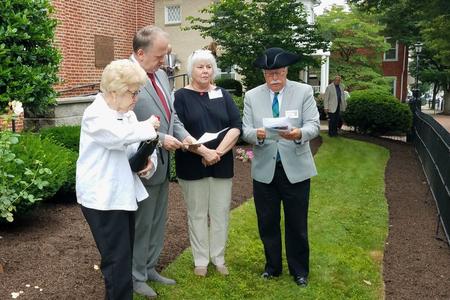 The year was 1830, and the “Sabbath School” had been newly formed at the town’s German Reformed Church.

Years later, in 1837, Thaddeus Stevens had just opened his blast furnace along the Conocheague Creek in the village of Caledonia, east of Chambersburg. That same year, as townspeople stabled their wagons and horses behind their nearby homes on South Main Street, someone took a moment to pen their name and the date in the bell-tower entry at Zion.

The younger members of Zion have done the same many times since in writings legible from 1855, 1866 and also the present day.

Take a walk through the Burial Grounds at Zion and you will find a cemetery full of the history and character of the town. Names such as Stouffer, Nitterhouse, Lutz, and several other epitaphs in the native German language of Zion’s founders.

Many tombstones hearken back to early 1800, with several prominent townspeople interred here as their “final resting place,” including graves of veterans – many who served their country as early as the Revolutionary War.

In the spring and fall months, this walkway to the church blossoms with the colors of the seasons.

Although its use as a cemetery has declined over the years, this plot of ‘sacred ground’ allows Zion to remain connected to its historic past.

We also view it as our commitment to maintain and preserve its heritage, for the generations of those who peacefully rest here. 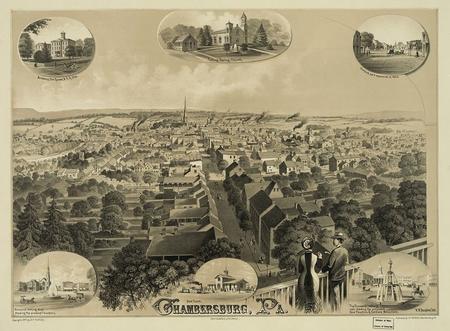 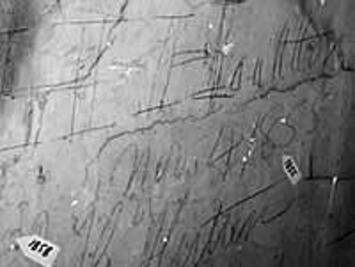 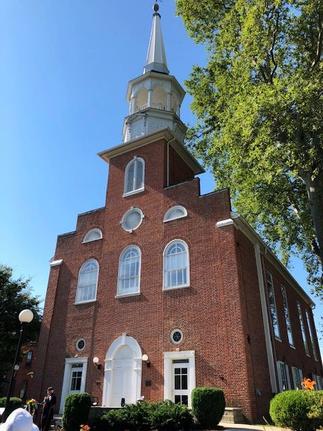 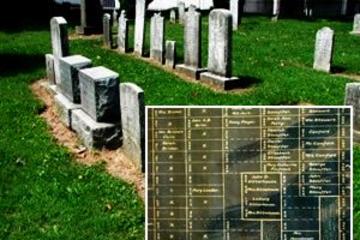 Descendants of town founder Col. Benjamin Chambers, Mara Smith (a church member) and past Interim Minster Rev. Bob Mcfarlane gather for the proclamation and cutting of the Rose Rent in June, 2021.

Interim Minister Rev. Bob Mcfarlane and Joan Pogue at left, select and cut the rose as called out in the original deed, for the Church's annual 'Rose Rent'  for 2020.

Time, weather and preservation costs all take their toll on helping preserve this area’s local history and the artifacts and relics of our heritage — not just here at Zion, but in each one of our local communities. At Zion, we are committed to maintaining our heritage for the enjoyment and education of future generations.

If YOU would like to help us preserve the history and traditions of Zion Reformed Church, please forward your donation via mail to:

Please indicate if you require a receipt for tax deduction purposes for your charitable donation!