In gratitude for those who have served as pastors of Zion, marble tablets from the original

church pulpit lists their names on the rear wall of the sanctuary.

who have been called to serve us throughout the years.

Reproduced below for readability is the quote found on the original two tablets.

One feature that bests highlights the American Colonial period of architecture in America, are the double circular stairways in Zion that lead to the second-and third floors.

The early 1800s hand-formed banister and balusters showcase what appear to be a “never-ending spiral” from the ground floor to the building’s balcony.

The balcony view of the Sanctuary shows both the Christian flag  and United States flags. The hanging wrought iron candelabras, one still an original dating to the 1800s, have since been electrified.

Suspended from the center medallion in the ceiling is the Church’s crystal chandelier, bought by the women of the Church in 1811 and hung when construction of the building was completed in 1813.

It was taken down and disassembled in 1835 during a renovation and stored, then forgotten. It was fully restored and re-hung in 1977, in its position of prominence in the Church in a special ceremony in 1977.

Its candles are lit only for Thanksgiving Eve and Christmas Eve celebrations.

For more about the chandelier, see The Waterford Chandelier. 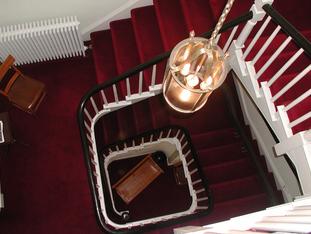 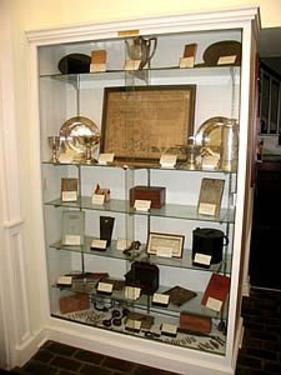 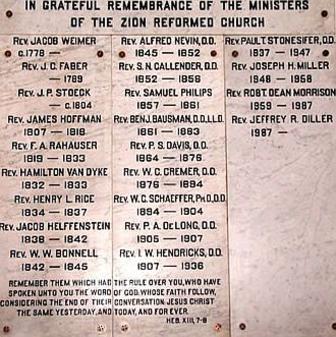 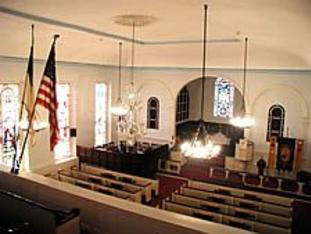 Inside the Historic Zion Reformed Church

Beyond the original heavy wooden front door of Zion lies a collection of historic items dating back to the early days of Zion Reformed Church:

On a regular basis, Zion traces back its early roots, by creating displays within its two stairway display cases. Often church-goers can see old photos, invitations and other memorabilia arranged to celebrate special occasions within the Church family.

Church members will often bequeath items of a personal nature to the Church, so that its history and heritage can be preserved and enjoyed by future generations.

of The United Church of Christ