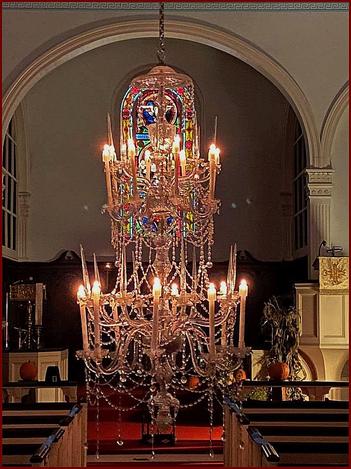 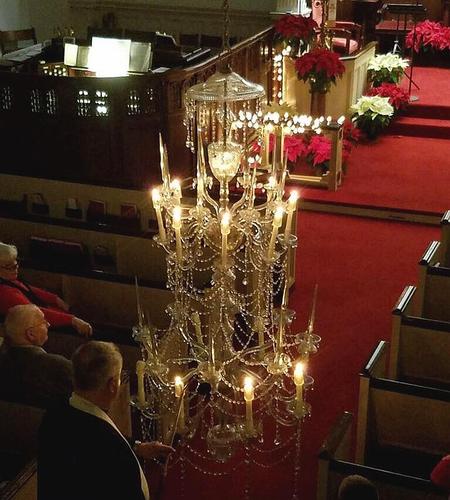 De-Bunking A Bit of Local Folklore

One bit of local popular folklore has somehow connected Zion’s chandelier to the Civil War invasion of the town on July 30 1864, when Confederate forces would occupy and torch the town.

The local folklore is that the chandelier was removed and hidden by members of the congregation to safeguard it from harm prior to Confederate forces entering Chambersburg. After entering the town that morning, the “invaders” burned most structures to the ground after town leaders refused to pay a ransom of $100,000 in gold or $500,000 in cash. (Most of the cash and gold of the local businesses and townspeople was removed days beforehand, and sent by way of the Cumberland Valley Railroad to nearby Harrisburg for safe-keeping).

More than 5,000 residents immediately became homeless as a result of the raid, and considerable stores of clothing, shoes and livestock were taken by Rebel forces. (At that time, the plight of Chambersburg became the nation's largest refugee crisis ever recorded).

Zion Reformed Church was only a handful of buildings to be spared from the Confederate’s torches.

“Remember Chambersburg!” would serve as a rallying cry for many Union troops, as they would later advance deeper into the South during the War, in the late summer of 1864.

Even though this interesting tale of removing the chandelier to save it from the perils of war is still passed along through the years, there is no historical fact or church record to support this or any similar version of this event. It is believed after the 1835 remodeling of the sanctuary it was simply not re-installed. Once stored and hidden from sight, it was merely forgotten about until re-discovered more than a century later!

When the newly constructed church home was completed in 1813, it was lighted by a large four-tiered glass chandelier purchased by the ladies of the church congregation for $300 — an impressive sum of money back in those days!

During a renovation to the sanctuary in 1835, the chandelier was replaced by oil lamps, dismantled into 1,725 parts, wrapped in newspapers and straw, and stored in a wooden crate under a stairway. There it remained until it was discovered in the 1940s.

The challenge to restore the chandelier was overwhelming and no-one accepted the task until the Church’s Bicentennial approached and a church couple, assisted by a few others, stepped up to the challenge.

Extensive research indicated it was an “Adams” type chandelier, a style made by the Waterford Glass Factory in Ireland. While it has not been fully ascertained that Zion's is a Waterford piece, it very closely resembles Waterford chandeliers which still today hang in St. Paul’s Cathedral, London, and in Guild Hall, Bath.

The restoration was completed and the chandelier re-hung and lighted for Christmas Eve services in 1977.

The chandelier is 98 inches in height, 40 inches in diameter, and adorned with 153 feet of crystal chain, and holds 16 candles. Lighting requires a church member crawling into the church’s attic and using a hand crank to lower the chandelier down to floor level.

The chandelier is lighted only for the church’s Thanksgiving Eve and Christmas Eve celebrations each year.

The lighting of Zion’s Waterford crystal chandelier is considered to be one of the highlights of the local religious Holiday observance, and it often draws many visitors wishing to see it in all its glory and splendor.